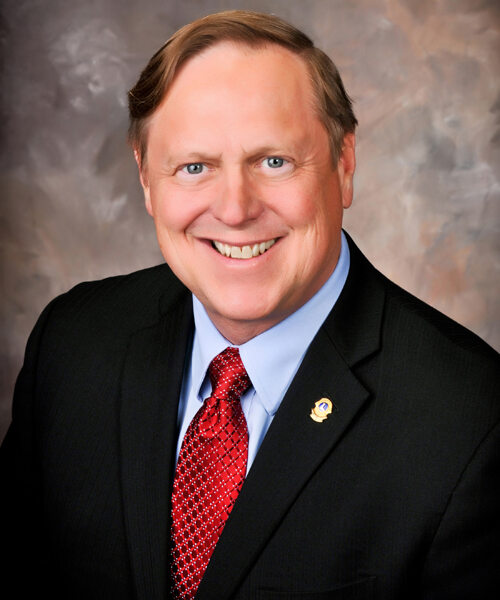 JOSEPH “JOE” PRESTON
PAST INTERNATIONAL RESIDENT
Joseph “Joe” Preston, of Mesa, Arizona, USA, was elected to serve as president of The International Association of Lions Clubs at the association’s 97th international convention held in Toronto, Ontario, Canada, July 4-8, 2014.
Past President Preston is a fleet sales manager.
A member of the Mesa Thunderbird Lions Club, Past International President Preston has been a Lion since 1974. He has held many offices within the association, including club president, zone chairperson, district governor and council chairperson. In addition, he has served as leadership, Lions Quest and MERL chairperson for his multiple district. He was also chairperson of the 1994 International Convention in Phoenix, Arizona, and the 2003 USA/Canada Lions Leadership Forum in Portland, Oregon; and a national multinational coordinator for Campaign Sight First II where he exceeded his goals.
In recognition of his service to the association, Preston has received numerous awards, including the 100% Club President Award, the 100% District Governor Award, a Key Member Award, a Medal of Merit, 11 International President’s Awards and an Ambassador of Good Will Award, the highest honor granted by the association to its members. He is also a Progressive Melvin Jones Fellow.
In addition to his Lion activities, Preston is past president of United Way of Yavapai County and a former board member of the Lions Foundation of Arizona.
Past President Preston and his wife, Joni, also a Lion and Melvin Jones Fellow, have two sons, one daughter and nine grandchildren.

(Agenda is subject to change. To Be Announced)

Training classes will be downtown Rolla at the Christ Episcopal Church. Lions will be taken from the hotel by bus to the church. We are planning to offer a catered lunch on site at the church (Additional cost would be $15 per/person. This was not included in the registration cost but paid for at the time registration packets were picked up).

Friday evening Hospitality will be held at the Quality Suites ballroom. Cash bar will be available from Rolla Lions Club.

Attendees are responsible for securing their own lodging.

Rooms are under MO Lions Convention

Contact Lion Jennie Mosher, jamosher9891@gmail.com, for more details and if you want to be on the planning committee.